Interview with a Winemaker: John Little of Rio Vista Wines 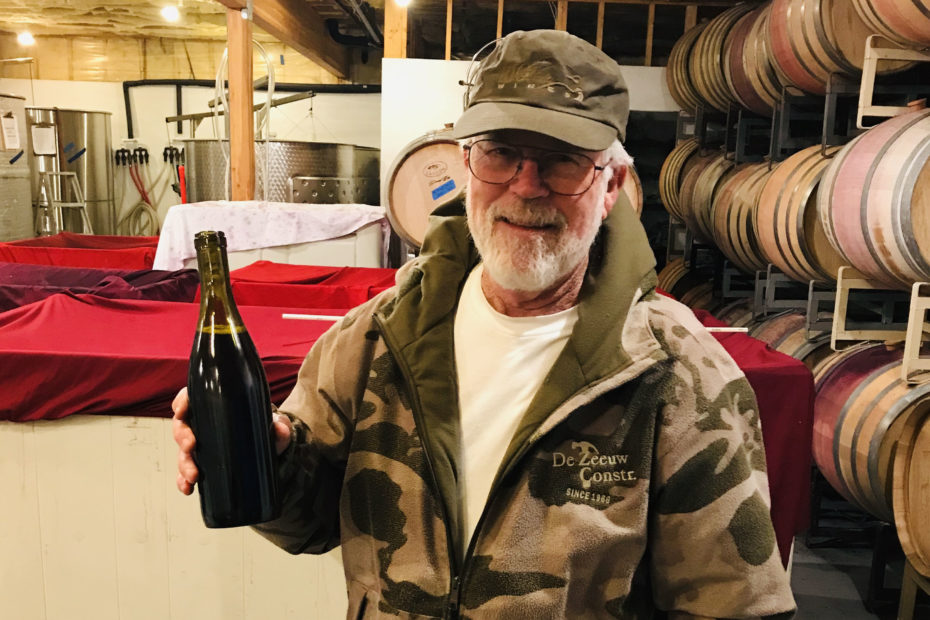 In my early adult life, I preferred to drink wine because beer seemed to give me stomach problems. Of course in the ‘60’s, “wine” to someone with little money meant jug wine.

My grandpa made loganberry wine in his dirt-floored cellar, so I figured it wasn’t rocket science. Even jug wine cost money, so to save money and to see if I could manage it, I tried making elderberry wine. I must have found a recipe somewhere, and elderberries were abundant as we had picked about 300 pounds to sell to a juice maker in Yakima. I bought a carboy and an airlock bubbler to keep air out, added sugar and yeast and made a couple gallons of the worst, most undrinkable (but beautiful) purple wine.

Years later, still looking for a way to get cheap wine, I discovered wine kits while traveling in B.C., Canada. Wine kits could be purchased in wine shops and came in a box containing either grape juice or concentrate, yeast, nutrients and cleaning powders.

The kits, usually coming from California or Australia, came with a step-by-step recipe explaining temperature requirements, tasting routine and aging requirements. You had the option to buy the kit and let the wine shop do the fermenting, or you could take it home and make it yourself.

Wanting to learn from the experience, I chose to take it home. After several kits and a few trips to local restaurants for discarded empty wine bottles, I thought it was safe to give my homemade wine to friends. Never heard any real sincere compliments.

Then along came Rio Vista. In 1995, along with two other couples, we had the opportunity to purchase eight acres along the Columbia River with the idea of building three vacation homes. That property is where Rio Vista Winery on the River is located today. Around 1997, before our plans could be realized, the “Growth Management Act” law came into play, limiting development to one house per five acres. By the year 2000, the two couple partners had lost interest in the property and Jan and I became the sole owners.

I grew up on a 40-acre farm in Port Angeles and purchased a 22-acre apple orchard years later in Bridgeport, which I grew to 50 acres by the early ‘80’s. I guess it is in my blood to grow things. So, in 2000, we decided to plant some grapes on our eight-acre, former horse ranch.

Scrounging used posts and wire from orchards that had given way for development, we planted our first ¾ acre vineyard consisting of Gewurztraminer, Pinot Gris, Merlot and Syrah. By 2003 we had a real crop of grapes!

I graduated from boxed wine to real grapes around 2001. We had a white seedless grape arbor with Hemrod grapes at our house in Wenatchee. I seized the opportunity and built a little grape press with an oak basket and automobile scissor jack operated by an electric drill motor. I destemmed and crushed the grapes by hand. By following what I had learned from making kit wine, I produced my first wine from grapes. I thought at the time that it was similar to a Riesling.

After that, I purchased two small stainless variable capacity tanks where the lids slide up and down inside an open-topped tank and are sealed with a bike-like inner tube around the lid. Having no facility yet, the grapes were forked into a small destemmer and transferred to a borrowed bladder press. As I had no building yet to ferment in, fermentation took place in the driveway under a maple tree. It was near Thanksgiving and fermentation was about finished when we had our first snowfall.

We had gone somewhere out of the house and, when we returned, snow, leaves and rain had fallen into the tanks on the floating the lids, filling the rimmed lids with debris. I needed to lift the lids out of the tanks with a little roped hooked to the center in order to clean them. Of course when I let the air out of the seal and tried to pull up the lid, it tipped and all the debris in the lid went into the wine.

I thought the jig was up and went to bed.

At 1:00am I awoke with a start, thinking I should put in some powdered SO2, which is used in winemaking as sort of a sterilant. I did some sleepy calculations and added the SO2. In the morning I recalculated and realized I had added 200 times more than I should have. Upon smelling the result, another lesson was learned. That wine never met a bottle or cork.

That same year, the first Merlot taught me what oxidized wine (not enough SO2) tasted like.  It also taught me how messy wine making can be when it boiled over the fermenter in our laundry room.

Learning to be a Winemaker

In 2004, I volunteered to be a cellar rat for three weeks at Lake Chelan Winery with winemaker Ray Sandidge. In about 2005, I took an evening class in winemaking taught at Wenatchee Valley College by local winemakers Craig Metrical and Ray Sandidge.

I continued reading anything I could find about winemaking. A paperback collection of B.C. winemakers’ called Chardonnay and Friends and two manuals from a home winemaking supply house in California called More Wine — one about white winemaking and one about red winemaking. All of them were very helpful.

By selling rental properties purchased from the sale of our apple orchard, we were able to build the present winemaking facility and tasting room, and gradually buy real big boy winemaking equipment.

In 2014 we purchased another 8 acres and planted 4 acres more of Viognier, Cabernet Sauvignon, Tempranillo, Barbera and Malbec. 2020 will be the fourth crop, making us about 80% Estate Grown Grapes.

Help Along the Way

During my learning years, a few people stood out as mentors and friends that I could count on in times of need. I met Ed Haskel in the winemaking class. He had purchased an apple orchard about the same time we purchased our property.

Growing apples at that time turned unprofitable, so he converted to grapes as a few other apple growers were beginning to do. We became friends and shared grape growing experiences. Ed was always available to help bucket those first grapes into the press and to punch down the cap when I was busy elsewhere. Being a social butterfly, he had connections everywhere.

One of our first bottling days, I discovered midway through that I hadn’t ordered enough bottles. Ed got on the phone and, before the crisis could accelerate, enough bottles showed up from another winery — with a surplus, no less.

Bill Hamlin, who owns and operates Custom Bottling, is a mentor who, in my book, is a mechanical genius who has bottled our wine for all 13 years of our existence. Though he is not a winemaker, his vast experience working with established winemakers has allowed him to learn many of the dos and don’ts of the craft. He will willingly share those tips with anyone who will listen.

In 2004, Jan and I both retired at the age of 62 and were able to move to Rio Vista to live out our retirement. It was in 2004 that we decided to plant two more acres of wine grapes. I had grown apples and had learned to prune and train them, but grapes were a different animal and presented a new learning curve.

Luckily, I was introduced to a grape grower from Mattawa named Miguel Garcia, who happened to be voted Grape Grower of the Year by his peers. We made trips back and forth between my 3-acre vineyard and his 450-acre vineyard to teach me how to grow excellent wine grapes.

Like Bill Hamlin, Miguel rubbed shoulders with many good winemakers who purchased his grapes, so he knew how properly-made wine was supposed to taste. One year I had doubts about the condition of 500 gallons of Chardonnay that I had been trying to clean up after I had discovered it had a bad case of halitosis. It had improved, but we both agreed that bottling wine that was below standard would be a bad start for a neophyte winemaker. So, one of my best decisions as a winemaker was to dump 500 gallons of Chardonnay — thanks Miguel!

We have been making award-winning wines ever since.